Is there a way out of temptations?

She is almost done grocery shopping and is standing in the queue to payment when she hears a small voice: “mommy…” From the sound of hear voice she knows what her daughter is up to. She has discovered her favorite candy and asks her if they can buy it? It’s Monday which means there are four days to the day she can have her sweets. What is she going to choose? Will she give in to her because it’s 4 pm and they’re both tired and exhausted or will she tell her no?
While discussing with herself what to do, she knows deep down how her daughter feels. Last Thursday the mother went shopping. She passed by the biscuits, the cookies and the cakes. In a hurry, she passed by the chips and the soda before she stood in the queue to payment. Then she saw it. Her favorite bar of chocolate was for sale. She made an exception and bought a thing, which wasn’t on the grocery list. She said to herself she was going to save it until Friday. The same evening she and her husband and were watching TV when they agreed they needed something sweet. She fetched the chocolate. In a few seconds the whole bar was gone.
The mother stops discussing with herself.  A word comes out of her mouth,  and the girl is laying on the floor screaming, because she heard the word “no.”

One small piece of chocolate isn’t enough. Five minutes on Facebook isn’t enough. Quickly, five minutes become thirty minutes or sixty minutes. There are good things about Facebook, but for me there are more downsides. I’m not going to list them here, but I’m both the girl and the mother in the supermarket. I have to take the decision and allow the small girl in me to waste time on Facebook or listen to the mother in me who says “No!” I know what the right choice is, but the right choice is often the hardest and the most unpleasant one.

How can we overcome temptations and make the hard, but right choice?

END_OF_DOCUMENT_TOKEN_TO_BE_REPLACED

A world of drops

What if we slow down
Turn off the TV, radio and cell phone
Walk in stead of running
Stop
and see

The dew in the grass
Raindrops

Moist stalks
Drops on the glass
The plop of the tap
Drops of
Coffee
Vegetable oil, grease
At the bottom of the pan

The reason why I stopped smiling

When I was 12-years-old, I was a shy girl who longed to have more friends. I found it was a good idea to smile to other people, and so I smiled to everyone at my school. The boys began to pay attention to me.  One day I sat at my school waiting for the bus home, and so did a group of 13-year-old boys. They touched my thighs. I told them no and pushed their hands away, but they didn’t listen. At one point they stopped. The following days I didn’t go near the boys, and I stopped smiling. The boys stopped touching my thighs, and they began bullying me.

Today, I’m married and have two kids. I still find it hard to smile. When the boys at my school crossed my lines, I was broken. I began to be ashamed of my body and of being a woman. For many years I hated myself, and my self image had negative consequences for my marriage.
When I was 17-year-old, I met my savior. Jesus started a long process of healing me. A few months ago, I stopped being ashamed. I began to think it was OK to be me, to be a woman.

I have met few boys and men who looked down on me because of my gender, but their disrespectful behavior has had an effect on me. I’m angry on the cultures, thoughts and ideas which make even small boys look down on women.

Last summer I was on vacation, when I was kept awake by a noise and lights. The next day I read in the news that in the town close to where I was staying, a 17-year-old girl had disappeared. The lights and noise that kept me awake, came from the helicopter, that searched for her. The following months many people in Denmark searched for the young girl and we prayed for her. Last month the young girl who had been disappeared was found. They found her dead in a waterhole. The police said she was a victim of a sex crime and murdered.

In Germany, some women wear pants with a lock to protect themselves from the danger of being molested. In many countries, women are treated like animals and have no rights.

I’m sitting by the keyboard when I meet a precipice. Mission impossible. Not the movie. Impossible? Wrong. Mission I AM possible. From where does the A come? From the alphabet, from the piano, from the chamber music? From the abstract? No. From the absurd? No. From the accusative? From calling on Abba? Yes. It’s God Father, who says I AM possible. I AM. I’m a possibility. To me everything is possible, God says. YAHWEH. He is the one He says He is. Powerful, strong, full of strength. So strong he can choose to be powerless, he can choose to die, to humiliate himself, he can choose to sacrifice himself. His grace is unconditional, his love is unlimited. He can forgive. He can move mountains. He can move borders. He can love the unloved. He is so holy that he loves everyone. He loves his creation infinitely. Unconditionally. Passionately. He died, but overcame death, sin, devil. He is the strongest. He is strength. God almighty.
But I am weak. Small. Powerless. Fragile. Full of sin. Full of shame. Full of thorns. I’m not a good person.
But I look at Jesus. I become silent. 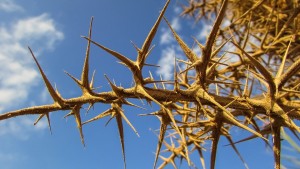